Have realised that I am addicted to art. I need a hit quite regularly, of really good, intense, well executed art and preferably of an erotic nature, and if I don’t get, it leads to a kind of despair. Happily, Paris Photo this year at the Grand Palais, was an art addict’s paradise and I walked through the exhibition feeling quite dizzy, floating a little above cloud 9, and still felt the affect some days after. My companion Oscar David only added to this, with his consistently challenging commentary, and equally passionate attitude for the photography on display. We discovered a number of our favourite artists and some of those included: Giles Berquet‘s stylistic representations of women and their heavy, steady streams of piss, frozen in time with the use of the traditional gelatin silver process. Nice to see analog is gaining even more value as an artistic genre in the age of digital media.

Nobuyoshi Araki, of course was there, and represented by a large mural work, seemingly destroyed with random brightly coloured paint splashes, shapes and smudges – not ruining though, but adding textural and motional elements and creating the impression of a layered vivid stained glass window which one must peer through, to witness the typical Arakian themes of bound women. 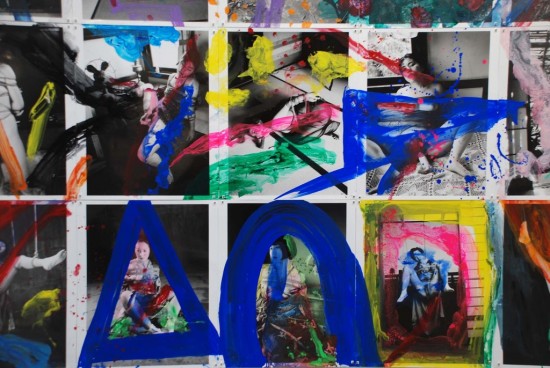 I discovered the work of the Viennese Actionists, from the mid 60s – 70s, which is a movement considered amongst the neo-avant gardists. Rudolf Schwarzkogler was a performance artist, staging scenes and events – actions – that were captured on film, and which were then printed/collaged/destroyed/reworked and exhibited. The final product as important as the process and sequence of events recorded. Indeed his art is both conceptual photography as well as performance art and has been considered an important cross-over point in which photography gained much credit as an art form also.  I’m less interested in what he was depicting in his actions rather more fascinated by the process and result. I will definitely be reading in depth the lovely catalogue they gave us.

Some other blogs about Paris Photo 2012